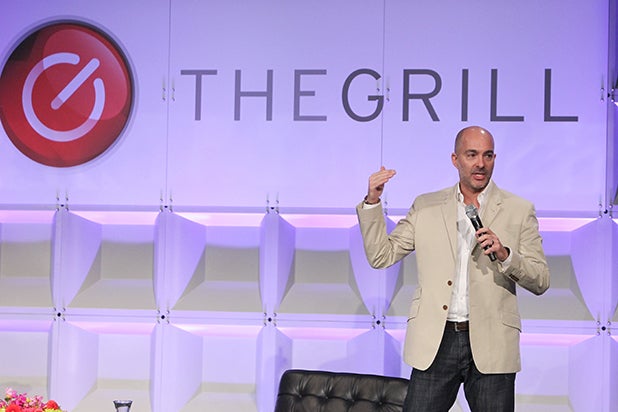 Movie stars sell the sizzle, but it’s the tech entrepreneurs who say they’re keeping the business on the cutting edge.

The audience at TheGrill, TheWrap‘s fifth annual Media Leadership Conference at the Montage hotel in Beverly Hills, got a sneak peek Monday at creative solutions to problems in areas like media buys, content creation and workflow. The presenters at the panel called “New Product Presentations, Product Placement, Social, and Data Flow” received a limited time to introduce their products was the solution to their business needs.

“Eighty-three percent of the world has connected devices,” said Mark Owens, EVP of Corbis Entertainment pointed out to the audience. “And they are not ad friendly.”

Launched in May, Corbis’ Branded Entertainment Network (BEN) is an interactive platform that provides global brands and media buyers with instant upstream access to film, TV, digital and celebrity placement opportunities resulting in a marketplace for integration. Owens noted that most consumers are able to easily skip ads and many platforms, like Netflix don’t play them. So embedding brands has become increasingly important.

“Embedding is more important than surrounding,” said Owens of the new opportunities BEN is providing for media buyers. “Embedding is the new media frontier.”

Also read: TheGrill: PepsiCo, Red Bull Execs – We Will Do What Hollywood Can’t

BEN uses a proprietary model allowing media agencies customized planning and reporting through third-party providers Nielsen and Motion Picture Group, guaranteeing impressions. Users can see options for placement and can search by genre. While BEN currently might not be ideal for smaller brands, major names like Heineken, Microsoft, Loreal are already using the system.

Flink CEO Dan Steneker was on hand to provide his solution to an issue as old as the Internet — getting content creators paid for their work.

Flink’s model centers on equitable revenue sharing with crowdsourced content from global producers. The site is reader-funded and the platform is set up to incentivize people to contribute to and share the stories. A full 50 percent of the revenue is split between the writers and distributors. Contributors are aggregated into groups, called Flinks, which allow users to easily find new writers.

The platform, which launched in June, announced at TheGrill that its latest partnership with Alan Cross, producer of “The Ongoing History of Music” is expected to draw major attention to Flink across the globe. Steneker noted that he expects the program will reach up to 5 million people starting in October.

And then there’s the headache that affects just about everyone in Hollywood, workflow in the cloud.

“People care deeply about the security around the content they are sharing,” said Josh Kline, head of Media and Entertainment at Box. “They need to know who is accessing it … and the ability to revoke that access.”

Kline compared Box to the more ubiquitous Dropbox, calling Dropbox the elegant solution for consumer content in the cloud, whereas Box is an enterprise solution. Box offers highly secure storage and multi-device access to important elements used by every Hollywood player, like screenplays, contracts, memos.

Kline is an Emmy Award-winning technologist who has spent the last 14 years building businesses in digital media with a focus on content production and distribution. Hollywood is one of Box’s largest growth areas, with clients like CAA, Discovery, NBC and Netflix.

“It offers ease of use,” said Kline.