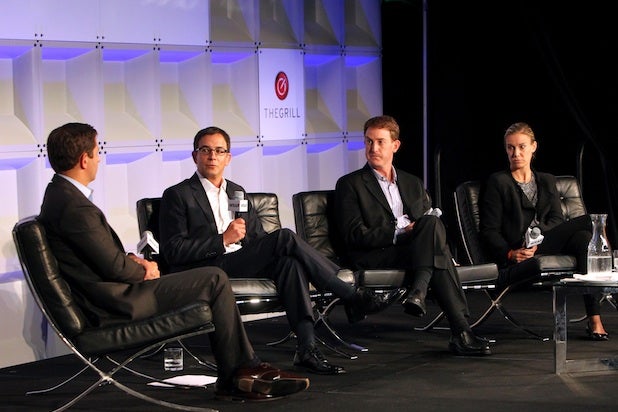 The talk turned to following the money at TheGrill, TheWrap‘s fifth annual Media Leadership Conference Tuesday at the Montage in Beverly Hills.

“We invest across all categories of sports and entertainment, consumer product and technology,” Hess said. “Our motto is we invest where we’re strategic. We are your strategic partner. If you’re a CEO, you tell us what you need. It’s a fun dynamic process.”

Settle said that Greycroft, which only invests in digital media, identifies platforms that are experiencing dramatic growth and looks at where consumers are spending time. It then searches for pioneers.

“What we look for are people who are early to a platform, because they will have the best understanding, will always be out ahead and have an enduring advantage,” she said.

Howard explained Shamrock’s approach. “We’re constantly looking at the sector and peeling the onion back several layers,” he said.

Also read: TheGrill: Crowdfunding Experts Ponder the Question of What’s In It for the Crowd

“When we identify a stable industry, we then ask where are there places to play and are growing even faster,” Howard continued. “So, if you look at sports in general. Instead of owning a team, where it’s about winning and losing and knowing your roster, it’s about where are there strengths behind these business plans.”

Shamrock looked at sports rights and acquired the Harlem Globetrotters, which was a live entertainment team that wasn’t subject to winning or losing. It also looked at ways to help the leagues and teams monetize their digital content.

“So, we’re constantly looking at the broader picture and going deeper,” Howard said.

In fact, all three panelists agreed that sports is one of the most booming sectors for investors right now, citing Monday’s billion dollar NBA deal as an example.

“Sports rights are beachfront real estate,” Hess said. “It’s very finite. People have to have it. You can’t replicate it. You can only have one Dodgers. It’s DVR-proof. So in this day and age when you have so little appointment viewing and you can control the programming itself, it becomes incredibly valuable and a valuable driver of networks.”

“Right now is an interesting time for online sports,” Settle continued. “I think the fandom, I think all of the fantasy sports stuff is incredible. All of the stuff that’s going on with online gaming as a sport may be an area where there’s things to do for venture capitalists, because there’s not yet all the stuff with the rights thing.”

Also read: TheGrill: Crowdfunder Raises $3.5 Million in Series A Round of Financing

Howard agreed, “There’s a lot still to be had in sports. It’s highly valuable. People are watching it on the screen, on the device, wherever they can. I think sports rights are going to continue to increase, and that’s why we continue to look at the sector.”