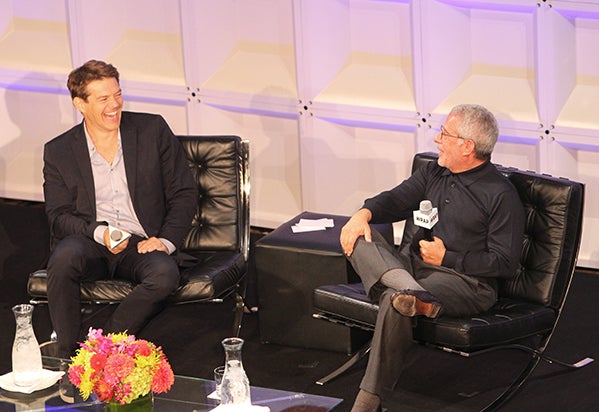 NBCUniversal Vice Chairman Ron Meyer took the stage at TheGrill 2014 on Tuesday, where he sat down for a fascinating interview with producer Jason Blum. They discussed Meyer’s biggest career regret and the films he’s most proud of, among several topics.

Blum started the conversation by confessing that he passed on “The Blair Witch Project,” a major lapse in judgment but not quite as epic Meyer’s admitted miss.

“Titanic is my first and 10th-biggest mistake. It’s hard to make bigger ones. I punked out,” Meyer said. “We’d said yes to Jim Cameron verbally for the domestic rights and my boss, Edgar Bronfman, well — he didn’t say, ‘Don’t do it’ but we were on a very bad roll. I’d made some huge mistakes and was certainly over my head in the beginning. I was trying to survive and Edgar said, ‘You’re gonna make another ‘Titanic’ movie? Really?’ I was trying to survive so I said, ‘No.’ I’m just getting over it now,” he joked.

He continued, “For a year and a half I’d wake up and say, ‘Fuck! This movie is No. 1 again?’ I felt like there was this red light on me, like, ‘You really are a schmuck.’ I get blame and credit for things I shouldn’t. I’ve never been a movie picker but ‘Titanic’ was 100 percent my decision. I wish I could blame it on other people. In the year and a half before it came out, every day in the papers it was about how stupid Fox was to make that movie. I probably would’ve been fired before it came out!”

“Those are the two movies I’m most proud of — besides “The Purge,” Meyer said, laughing. “Even though we did ‘Brokeback Mountain’ through Focus, I’m proud we did it. It was a courageous film that really meant something and it turned out to be a hit, but that was never the intent.

Also read: TheGrill: Crowdfunding Experts Ponder the Question of What’s In It for the Crowd

“The other was ‘United 93,’ which turned out to be profitable also but it really showed what a great country we live in and what great people do [during difficult times]. We saw it with the surviving families and it was an extraordinary experience. So those two movies stand out and when I’m long gone, I hope people remember those movies got made during my watch.”

Meyer elaborated on the decision to greenlight “United 93” so soon after 9/11.

“It was a tough decision but Paul (Greengrass) was the right director with the right script, and Tim (Bevan) and Eric (Fellner) of Working Title were the right producers. It felt like 9/11 was enough behind us that it was time to tell the first story, which was an important part of American history. It wasn’t an obvious financial success but it ended up making money. We had the right elements to make it.”

Also read: TheGrill: Crowdfunder Raises $3.5 Million in Series A Round of Financing (Exclusive)

Still, it sounded like Meyer was unsure of whether those two movies could still be made in today’s marketplace.

“‘Jaws’ cost $6 million and today, it would cost $230 million. There’s books written about the $40 million that United Artists lost on ‘Heaven’s Gate.’ The problem is that ticket prices didn’t go up proportionately. They went up from $7 to $12 while the cost of movies went from $6 million to $200 million. That’s been the biggest change along with various forms of distribution, but the basics haven’t changed; the cost is still the biggest risk.”