(Spoiler alert: This guide is intended to help those who haven’t watched the show get a feel for what “Game of Thrones” is all about, and it will also help if you do watch but need some refreshers. Either way, major plot details and spoilers are everywhere … you have been warned.)

So you’re “that guy” — the one amongst your main group of friends who doesn’t watch “Game of Thrones.” Believe it or not, you aren’t alone. Actually, most people don’t watch it.

But that’s a small comfort when you’re trying to hang out with your pals but they can’t stop talking about a thing you don’t know anything about. Or when you’re trying to use social media on a Sunday night but it’s no use because all anybody is doing is losing their minds about whatever beloved “Game of Thrones” character died that week.

Unfortunately, we’re now six seasons into the show, so catching up the old fashioned way — by watching every episode that has aired so far or going old school and reading George R.R. Martin‘s novels — is probably not in the cards. We get it, you’re busy — and we’re here to help.

Note that this won’t be comprehensive — it can’t be, because a comprehensive explanation of everything that’s happened on the show and all the history that played into it would take nearly as long as watching the show itself. Sure, “Game of Thrones” only has 60 episodes so far, but those episodes are really dense, so we’re going to try to keep it as simple as possible.

First things first. Here’s the official “Game of Thrones” map of the world (click to enlarge): 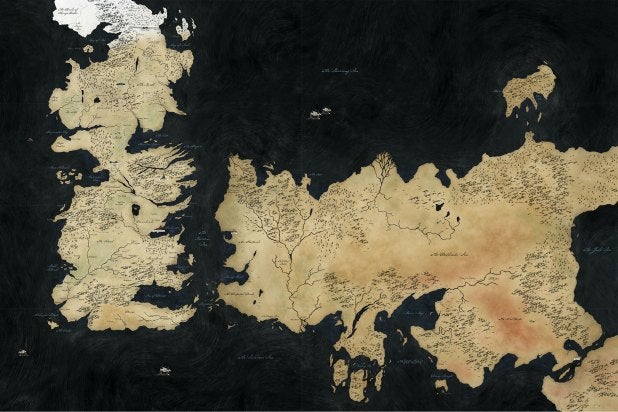 The continent on the left is Westeros, and the one on the right is Essos. Most of the show takes place in Westeros, but Daenerys’ entire narrative so far has taken her all over Essos, and Arya has been hanging out in Essos for the last season. The body of water between the two is the Narrow Sea. To the north of Essos is the Shivering Sea, and to the south is the Summer Sea. To the west of Westeros lies the Sunset Sea.

The places you need to know in Westeros are: Winterfell, in the center of the northern chunk; King’s Landing, the capital, in the southern middle on the eastern coast; Dorne, that part that looks like a foot at the bottom; and the Wall, which is that line at the far north just above where the map turns white. In Season 7, Dragonstone, a small island just east of King’s Landing, is pretty important as well (and here’s a full rundown of everything you need to know about Dragonstone to prepare you).

The places you need to know in Essos are: the Free Cities, along the western and southwestern coasts; Slaver’s Bay, which includes Meereen, which is that large bay on the southern coast; the Dothraki Sea, which is not actually a sea but just that big smudgy part in the middle where the nomadic Dothraki people roam; and Asshai, home of the Red Priests and Priestesses, on the far southeastern end.

Other random terms and info you need to know:

Who are all these people?

There have been about four dozen actors who have been counted as series regulars in the opening credits during its run, with 28 of them making the cut in Season 6, and that doesn’t even remotely cover everyone who’s important now or has been important in the past. You know Hodor, that guy everybody won’t shut up about? The actor who played him, Kristain Nairn, has always been counted as a “recurring” cast member. There are just too many characters.

Fortunately, HBO anticipated this problem. Back when it released the first season of “Game of Thrones” on disc, it included printed-out family trees for the major family groups, with pictures of everybody. These days, they’ve gotten more sophisticated, as the “Game of Thrones” official site constantly updates those trees with who’s died lately and so forth. So let’s take a look at the status of the major families of Westeros. 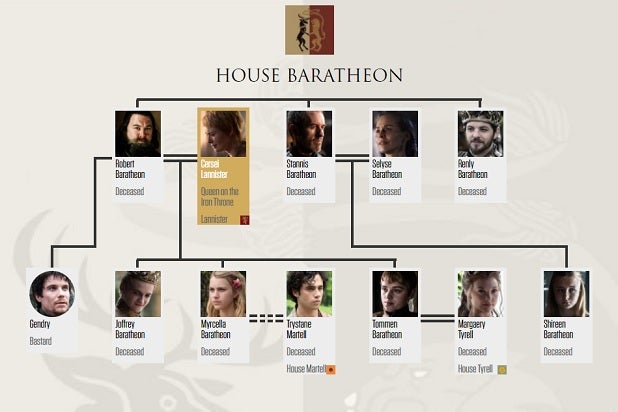 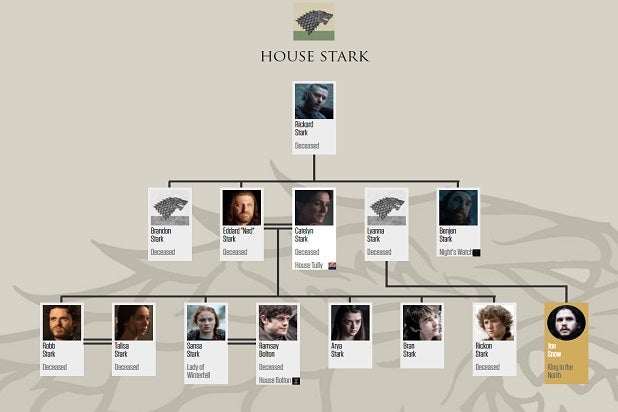 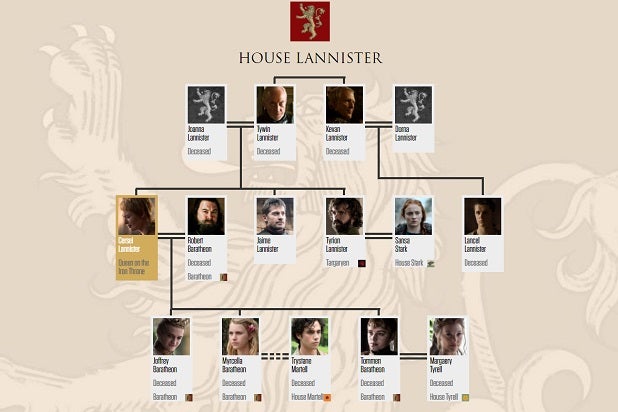 Though the family trees are a good starting point, they also invite questions, like “Why are most of these people dead?” and “How does Sansa have two husbands?” Also, you probably heard there was incest on this show but you don’t see it on the family tree. And, of course, not all the big characters are in those trees — like Daenerys and the religious leader (the High Sparrow) people jokingly refer to as Bernie Sanders.

And there are those direwolves the Stark kids keep as pets. Like the Starks themselves, the direwolves haven’t fared so well. Here’s a rundown of which of the very special, extra-huge wolves are still kicking going into Season 7.

So now we come to the second step toward understanding who all these people are. For this step, you can refer to the gallery below, which will take you through the major players in Season 6, where they are and what their deal is.

GALLERY: Who Are All These People on 'Game of Thrones'? (Photos)

And here are some quick refreshers on the states of the major Great Houses in the show, which outline who’s dead, how they died, and who’s still standing.

But, like, what actually has happened on this show?
As hinted at above, OMG SO MUCH. Too much to describe here.

But the short version of the big picture is this: In Westeros, twin brother and sister Jaime Lannister and Queen Cersei had sex with each other, and all of King Robert’s “official” kids are actually Jaime’s kids. So Robert’s death set off a war of succession between Cersei’s son Joffrey, Robert’s brothers Renley and Stannis, and Robb Stark called the War of the Five Kings (oh, at the same time, Baelon Greyjoy, the lord of a Viking-like group of islanders called the Ironborn, declared himself king and started attacking mainland castles). Now Joffrey, Renley, Stannis and Robb (and Baelon) are all dead.

Joffrey was succeeded by his younger brother Tommen, a nice kid but a relatively weak king. Cersei, meanwhile, has been doing so much conspiring and backstabbing that she has no allies but Jaime. When Cersei allowed a religious guy called the High Sparrow to restart an armed group of religious fanatics called the Faith Militant as part of her schemes, she accidentally gave them the power to take over the city.

The Sparrow put Cersei on trial for her sins (along with Tommen’s wife Margaery of House Tyrell). At the end of Season 6, Cersei used a particularly horrible thing called wildfire to blow up the Sept of Baelor, where the trials were supposed to take place, killing all her (supposed) enemies like Margaery, and wiping out the Faith Militant. In his despair, Tommen committed suicide. So now Cersei has no kids and Robert has no heir, leaving Cersei as queen of the Seven Kingdoms.

Meanwhile, Daenerys is the daughter of the long-dead Mad King and the last known surviving member of House Targaryen, who died at the end of King Robert’s rebellion against him. Daenerys has lived her whole life in Essos, and she’s been tearing across the continent gathering forces for an eventual invasion of Westeros to take back the throne for House Targaryen. Her main ace in the hole are her three dragons, which she hatched back in Season 1. This is a big deal — dragons were extinct in the world before now, so Daenerys’ dragons are the only ones in existence, and they’re extremely deadly.

Dany has a lot of allies besides the dragons. She just added all of the Dothraki people to those forces, and the Greyjoy kids, Yara and Theon, have pledged their fleet of ships to her cause. Tyrion Lannister, the exiled and hated but very smart brother of Cersei, is now Daenerys’ Hand of the Queen. With all that Dany finally has the forces she needs to sail back to Westeros. At the start of Season 7, she’s finally arrived at Dragonstone.

In the North, the houses loyal to the Starks just proclaimed Jon Snow the King in the North after he and Sansa Stark recaptured their ancestral home of Winterfell.

In the far north of Westeros, the White Walkers command an undead army and prepare to head south in an attempt to murder everyone in the entire world. They’re led by a scary guy called the Night King.

Bran Stark has returned from north of the Wall, where he went to meet up with a magical guy who can see through time called the Three-Eyed Raven to learn important stuff to fight the White Walkers. The old Three-Eyed Raven was killed, so Bran is the new Three-Eyed Raven. Oh, and Bran can use his mind to take control of animals and sometimes people. Maybe the other Stark kids can too.

All that is hardly a satisfactory explanation, however. So below you’ll find a gallery of major events that have occurred on the show, in chronological order. This is not a thorough plot summary — just short explainers for stuff that happened that people talk about a lot.

GALLERY: 'Game of Thrones': The Key Events In the Series So Far (Photos)

A lot of characters have died.
There have been many major deaths, yes, which is why the turnover on actors listed in the main credits is so high. If you want to know about the dead people and the various horrific ways they were killed (people don’t really die of natural causes on “Game of Thrones”), check out our regularly updated deaths gallery.

And for a slightly faster refresher of secondary characters who were a big deal until their tragic deaths, here’s our gallery on important people who died you’ve probably forgotten.

Anything else?
Hell yeah. You can’t hold a conversation about “Game of Thrones” just by talking about what’s aired. You also have to be up on the latest fan theories and need at least a little bit of lore knowledge since the show has been making a lot of references to things that happened prior to the events of the show lately. Below you’ll find links to our previous coverage, as well as links to more detailed explainers of the narrative arcs of some of the major characters.

Children of the Forest, White Walkers and Westeros’ Ancient History

The Tower of Joy, Ned Stark and Jon Snow’s Parentage

What exactly happened with Hodor and that time loop?

Everything you need to know about the Order of the Maesters

What can kill White Walkers, and what is Dragonglass?drag

Did Bran Stark Cause the Mad King’s Downfall?

Will Cersei get Tommen killed?

21 big fan theories for Season 7 and beyond

Other odds and ends

The 11 most memorable sex scenes

And that’s all. Now you know enough about “Game of Thrones” to pretend you’ve seen it, watch the new episode Sunday at 9 p.m. ET on HBO.