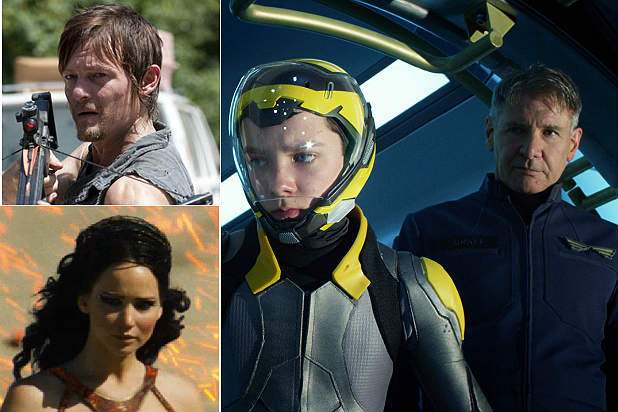 Will ‘Ender’s Game’ Rescue the Struggling Visual Effects Industry?
Digital Domain, the VFX company that created the world Orson Scott Card imagined in his 1985 novel, sure hopes so.

‘Walking Dead’ Beats World Series, ‘Sunday Night Football’ in Key Demo
The horde of faithful fans of the AMC zombie drama are beginning to out number admirers of America’s favorite past time, so it came as no surprise this week that the series has been renewed for a fifth season.

6 More Shows We Think Are Doomed, From ‘Hostages’ to ‘Sean’
Sorry, Jerry Bruckheimer, but “The Lone Ranger” may not be the only flop you produced this year.

Boston Red Sox Win First World Series at Fenway in 95 Years
The team may have broke an 86-year-old curse when they won the MLB championship in 2004, but this year they won it at home, which also happens to be the oldest stadium in baseball. And then some guy dropped the F-bomb on television. Wicked.

The Sox broke an 86-year curse in 2004, when they won their first series since 1918. That was also the last series the Sox won at home.

Crazy-Crowded Christmas at Box Office: Will Hollywood Ever Learn?
A crowd of big-budget tentpoles resulted in inevitable box office casualties over the summer, and it looks like history could repeat itself pretty quickly as studios plan to pack in every awards contender in their inventory.

IFA to Close: Ryan Gosling Remains Off the Market, But Expect a Feeding Frenzy for Others
Gosling will now have two managers and no agent, but “it’s off to the races” for hungry agents to sign Angelina Jolie, Josh Hartnett, Ken Marino or Richard Schiff.

River Phoenix’s Final Moments Revealed in New Book: ‘I Think I’m OD’ing’
“I still have guilt that I dismissed his worries so casually,” addiction specialist and “Celebrity Rehab” star Bob Forrest writes in his new memoir, “Running With Monsters.”

Orson Scott Card Won’t Make Squat From ‘Ender’s Game’ Box Office – Boycott the Book Instead (Exclusive)
Boycotts have been planned ever since Card’s homophobic comments, and involvement in anti-gay marriage organizations, came to light months ago. Unfortunately, they it doesn’t appear as if they will affect Card’s cash flow in the slightest.

‘Wolverine’ Writer Mark Bomback to Polish ‘Fifty Shades of Grey’ Screenplay (Exclusive)
And Anastasia Steele’s amateur photographer friend, Jose, is being played by “How to Make It in America” star Victor Rasuk.

Jonas Brothers Have Broken Up: ‘It’s Over for Now’
NOOOOOOOOOOOOOOOOOOOO!!!!!!!! But wait, there is some good news for the JoBro’s fan base. They’re releasing four songs from their fifth studio album, which the world — sadly — will never hear in its entirety.

Thor, Katniss and ‘Bad Grandpa’ Among Most Popular Movie-Inspired Halloween Costumes
Find out if that movie-themed costume you wore on Thursday was as original as you thought it was.

Julianne Hough’s Halloween Costume: 5 Things More Racist Than Her Crazy Eyes Getup
Wearing makeup on your face to look like an African American television character for Halloween is a bad idea. But not as bad as these five reminders that racism continues to run rampant in America.