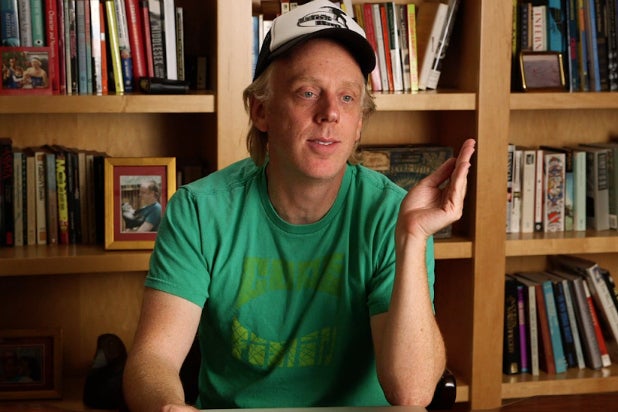 Mike White is a writer’s writer. So when the Academy of Motion Pictures Arts and Sciences asked him to participate in its new digital series, naturally the topic was writing. Or more accurately, not writing.

“Academy Originals” is the Academy’s first original digital series, with new episodes every Monday. The doc-style show covers everything from creative process for filmmakers to historical moments in filmmaking, and more. In the video below, which launched on Monday, the former “Enlightened” showrunner discusses the value of procrastination and time not spent at the keyboard.

In a conversation with TheWrap on the same day, White expounded on the topic and masterfully tackled plenty others. We spoke comedy models, if “Enlightened” will live again and White’s belief that street-fighting and algebra are mutually exclusive talents. Sorry, “Good Will Hunting.”

Read our interview with the “School of Rock” writer and then watch the AMPAS video below:

TheWrap: Tell us a bit about why you got involved in “Academy Originals”?
White: I don’t know, they just approached me and I — they were talking about the creative process and, I don’t know, it’s the Academy, what am I gonna say, “F off?” I dunno. Honestly, I didn’t really know what it was about but, whatever, if somebody wants to listen to me yammer I’ll do it.

I noticed you highlighted procrastination. Could you talk a little bit about what you mean, and how seriously you feel like procrastination is your friend?
Sometimes when you hear people who are creative, talking about their process, I sometimes — when I go to those things — it makes me anxious cause it’s like, all these very accomplished people talking about their genius processes. And it’s like I just go, “Oh God.”

For me it’s always so hard and it always takes so much time and I always feel lazy and I always feel like, you know, it doesn’t always come so smoothly. I just felt like, I would like to approach this from the place of like, something that would be more comforting to me as a viewer where you acknowledge — and I do believe in it to, that sometimes the process of making something.

When I was young, I always used to think that all that down time between those bursts of productivity were a waste of time and I wish that they could always be always flowing and always getting things written or made. Now that I’ve been doing it as long as I have, over decades of time you just start to realize that’s part of, like, the creative economy. Just like the financial economy has recessions and inflations, peaks and valleys, it’s the same with the creative economy. There’s time where you are getting paid and getting stuff done, but in order to do that you have to have those periods where it just looks like you’re kind of, I don’t know, banging your head against the wall or wasting time.

Also read: LeVar Burton on Reviving ‘Reading Rainbow,’ Mentor William Shatner and Being the Butt of the Joke

Do you find it easier to write yourself as the butt of the joke? You were both the hero and the butt of many jokes in “Enlightened” — is that liberating or tough for you?
That just made me think of, what was that movie, “Good Will Hunting” where the guy was like: He’s a street brawler but he’s also a genius who can finish equations no scientist could ever come up with. I remember when I was young, going, “Oh God, I could never.” It’s not some lack of self-esteem, but I also feel like, I don’t know, I tend to in general like characters that are more flawed. I wouldn’t want myself to be the exception to that creative trend as a writer. I don’t think it’s necessarily the butt of a joke, but it’s showing your — I think trying to get a truth of the flawed reality of yourself is a more — at least it feels like a wordy endeavor to me, as opposed to showing the super-heroic side of yourself.

So no Mike White street-brawler movie or show coming out soon, then?
(Laughs) I think that would be pretty funny though.

I know “Enlightened” is a year or two removed from your radar now, but with “Community” picked up by Yahoo Screen, is there any chance, with all these other mediums coming around, that a project like that could be revived?
Well, I don’t even think it necessarily needs to be a new medium. You look at “The Comeback” and HBO who’s given that a new life after many years being on the shelf. “Enlightened,” I do think there’s always the possibility.

For me, I take it as a challenge creatively to — sometimes it’s frustrating to have to like, start pushing the boulder up from the bottom of the hill again. But I also feel like that’s the fun of it, too — to have to come up with something new. As much as I was bummed that the show ended, I also feel like it’s opened me up to create new worlds, new characters and figure out what I want to express outside of the scope of “Enlightened.”

I’m not standing at HBO’s door going like, “Please, please pick up the show!” I feel like I’ve talked about other possible shows for them. I’ve been writing movies. So there’s good things about the cancellation personally for me, and hopefully I’ll be able to make something that people like equally as well.

But it’s not a situation like, I don’t approach it — obviously with “Enlightened — but it’s not like I’m looking to go, “How do I get 100 episodes of this show?” It’s not about syndication, it’s really about the creative excitement of it. And I did think there was enough to keep going, but I also feel like it’s not a devastating thing for me. It just means I gotta come up with a new idea.

Also read: ‘The Leftovers’ Reviews: Is Damon Lindelof’s New HBO Show Worth the Premium Cost or Bound to Get ‘Lost’?

What do you think is a perfect model for these comedies?  I see it a lot with HBO: with Stephen Merchant‘s “Hello Ladies” and Chris Lilley; “Silicon Valley” was great because it was only 8 episodes. That’s the great part of being on HBO: You don’t get that many episodes, and you don’t saturate it. What would be the perfect model for you as a writer?
“Enlightened” was a perfect model for me because it was just big enough that I could write all the episodes. I didn’t have to deal with a writing staff, which was not my strength. I could write all the episodes prior to production, which is great so you don’t have to be — that’s difficult in network television where you’re trying to wear all those hats simultaneously, and that’s virtually impossible for me.

HBO and a smaller order is definitely the ideal. I do feel like it’s slightly frustrating; sometimes yeah, I’ll look at these other shows that have gotten multiple season orders, and I’m like, “There’s more here than there.” Whenever I’d get frustrated — I thought “Enlightened” still had stuff to say. But I also understand that it was ratings-challenged or whatever.

I’m not a part of those decisions of what’s valuable to them, so I can’t speak to that but I would like to be able to — it’s been nice being in the features world for the last year and a half. My life is more my own right now, but I would like to go back to TV. I guess I like having a situation similar to “Enlightened,” hopefully with a little bit more control as to whether I’m able to keep making more of them.

But I think being a showrunner of a show plays more to my strengths than even being a feature writer or director, just because I like to keep going back to the same characters and build out a world in increments, you know?