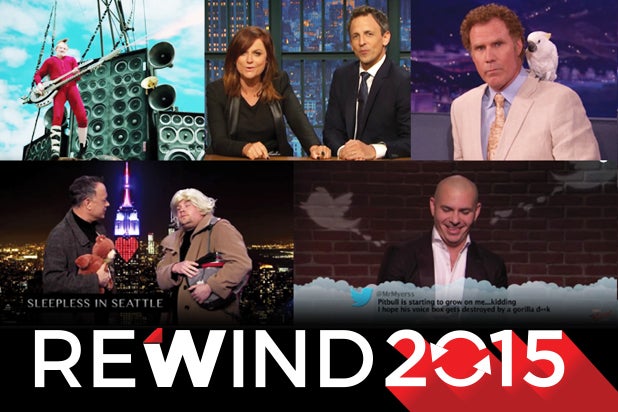 Every year, the small-screen loses a bit of its importance as the even-smaller-screen gains in popularity.

Entertaining in the evenings is merely one job of the late-night host in 2015. What one really needs to compete in the short-attention-span, cord-cutting millennial era is staying power on the Internet. Fortunately for both us and their respective networks, Jimmy Fallon, Jimmy Kimmel, and James Corden have that in spades. Oh, and Conan O’Brien, Seth Meyers, and Stephen Colbert aren’t so terrible at it either.

Below are 2015’s 11 best viral videos from the latest day part. We’ve selected two per show, save Colbert, that is. The new “Late Show” host only gets one, because he has the shortest tenure and the longest clip.

So Mean, So Very Mean
It’d be criminal to compile a list like this and not kick it off with a “Mean Tweets” segment from “Jimmy Kimmel Live.” So, why not choose the biggest entertainment industry one of the year? Notice we didn’t say “the biggest of the year” in general — that one was President Obama’s, which you can find here. The POTUS “Mean Tweets” actually has the most views in franchise history.

It’s unclear if the funniest diss from this music edition is against Ed Sheeran, Pitbull, or Ariana Grande. Watch the video and let us know your favorite via the comments section below:

“Mad Conan: Fury Road”
This “Conan” Comic Con opening is very funny, yes — but it also kind of just falls under the category of “very well done.” A great and highly stylized film like “Mad Max: Fury Road” will always generate a ton of spoofs, and the “Conan” TBS team won the web with its perfect parody.

Always Be My Passenger
We chose to highlight this version of “Carpool Karaoke” because Mariah Carey was the recurring skit’s very first guest, kicking off a legitimate viral video franchise for James Corden. The below video got a whopping 12 million views, which kind of seems like small potatoes compared to the 43 million Justin Bieber’s first visit to the Range Rover received.

Jon Snow Comes to Dinner, Brings Winter
Laughing at this point in post, yes? You won’t be laughing when the White Walkers rip you limb from limb, and packs of pale spiders as big as hounds feast on your remains. OK, maybe you still will, because this is a terrific filmed sketch by Seth Meyers and his merry men.

So, yes, you should laugh at this “Late Night” sketch starring “Games of Thrones” character Jon Snow — regardless of what the dark Kit Harington character threatens — because it’s hysterical. Watch the video:

Is That a Parrot on Your Shoulder, or Are You Just Happy to See Me?
Will Ferrell and cockatoo Professor Feathers stopped by “Conan” in March, when the actor came to plug movie “Get Hard.” One thing he most certainly did NOT come to do was talk about his feathered friend, who may or may not teach college courses, per the beaked-one’s name.

But Conan made it weird. And Ferrell made it hysterical. Watch the video and try to keep a straight face along with Ferrell:

Men of Many Voices
“Family Guy” creator Seth MacFarlane will blow your mind when he does an impression in an impression at the end of the below video, but his Liam Neeson and Bobcat Goldthwait are probably the best impersonations of this bit.

Good as the clip is, its roughly 12 million views doesn’t come close to the musical version starring Christina Aguilera, which has scored 49 million in just 9 months. We just happen to like this one more, so watch it here:

Only in America
As mentioned above, Stephen Colbert only gets one video in our count because a) His show has been on just a few months, b) He doesn’t create a ton of viral clips, and c) The video we selected is like 41 minutes long. We’d say he’s covered.

This entire episode of “Only in Monroe” was one of the awesome ways Colbert killed time between “The Colbert Report” and “The Late Show.” Spend some time with genius here:

Welcome to the Future
We believe Jimmy Kimmel is our future. Or, at least, he’s Marty McFly and Doc Brown’s future.

“Jimmy Kimmel Live!” welcomed Michael J. Fox and Christopher Lloyd on “Back to the Future II” Day, Oct. 21, 2015. With a theater full of people, the trio landed some solid jokes about what the film nailed and whiffed on from a prediction standpoint — and also exactly just what the hell is wrong with society these days anyway. Apparently “2015 kinda sucks,” but this clip doesn’t:

Go “Big” or Go Home
James Corden‘s debut evening gave us his first big viral video splash, thanks to guest Tom Hanks, a cool premise, and a bunch of readily available props. Below, the two act out Hanks’ lengthy and illustrious movie career in less than 7 minutes, from “Forrest Gump” to “Toy Story.”

Corden hasn’t looked back since. Watch the scene:

Also Read: Stephen Colbert Has Yet to Top Jimmy Kimmel in November Ratings

We’re “So Excited” for Jimmy Fallon‘s Visit to Bayside High
This may be the best late-night viral video of the year — at least to ’90s kids. Somehow, Fallon brings out the kid in everyone — even actors who try to avoid their infamous characters of days’ past. Great set, great costume design, and most of the “Saved By the Bell” cast looks like they could still pass for high school kids.

Let’s all keep our Mr. Belding (Dennis Haskins) weight comments to ourselves, and we’ll pretend that Screech and Lisa are off doing The Sprain. Enjoy:

“Really!?!” Reunion
Anytime Amy Poehler and Seth Meyers get behind a desk together, we are going to love it and share it. The beloved “Saturday Night Live” team reunited in June to rekindle their old recurring “Weekend Update” segment, “Really!?!” It was all in the name of trashing sexism — and it was excellent. Really.